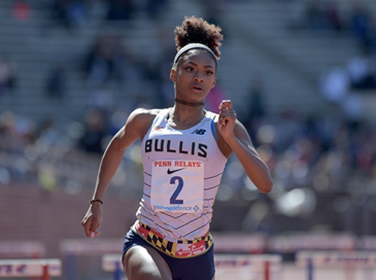 Masai Russell '18 was no stranger to winning as a member of the Bullis community and even after graduating a few weeks ago, she has added a few more titles to her list. Gatorade has named Masai the Maryland Girls Track & Field Athlete of the Year. The Gatorade Player of the Year award was established in 1985 to recognize the nation's most elite high school student-athletes for their athletic excellence, academic achievement and exemplary character. Masai ran a state record 300M Hurdle time (40.16) at the ISL Championships this year. This was also the nation's #1 performance this season and #4 time in history. She also raced in the USATF Junior Outdoor Championships finishing third in the 400M Hurdles. Masai has signed a scholarship to run at the University of Tennessee next year.