Coach Pat Cilento joined the Bullis community in 2010 as an academic advisor and Head Varsity Football Coach. In 2015 he was named Head Varsity Baseball Coach as well. Since joining Bullis, Cilento has brought IAC Championships to Bullis Football 2011, 2013, 2014, and 2015.

Since joining Bullis, Coach Cilento has sent multiple athletes to play every level in the NCAA. He has accumulated a record of 61-18 in 8 seasons.

Before joining Bullis, Cilento was the Head Varsity Coach at Springbrook High School for one season, and their Offensive Coordinator for two seasons. Cilento played quarterback at Western Carolina University in the 2001 season. In high school Cilento played at Sherwood, where he was named to the All-Met 1st Team Offense in 1995 after leading the Co-No. 1 Warriors to Maryland 4A title by passing for 1,620 yards and 14 touchdowns. 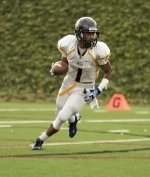