<Back to News
Breaking the Ice at Bullis: Frozen Jr. 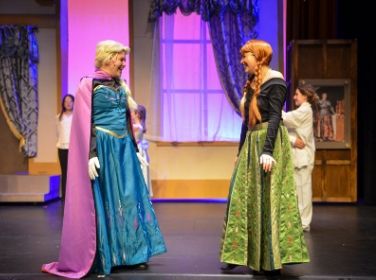 As the applause faded on last spring's Middle School performance of The Wizard of Oz and the set was being struck, director and Middle School Theatre Teacher Chelsie King (then Lloyd) had a surprise announcement for cast and crew: the 2020 Middle School musical would be Frozen Jr. The excited students would have to wait—much would need to happen before opening night in February 2020!

Last September, work on Frozen Jr. began in earnest. A Bullis theatre production is a complex collaborative effort that takes months of preparation—more than a year goes by from first acquiring the script to a fully designed production and a well-prepared cast and crew. In October, King and Director of Technical Theatre Arts Anthony Brooks sat down to brainstorm the production. "We wanted to think of ways to create a minimal set," Brooks said, "keeping our work education-based and cost effective. A minimal aesthetic can be very creative and effective." They have also found clever ways to recycle set pieces from previous plays such as Mamma Mia! and The Wizard of Oz. Their plan will also ensure that students working on the set gain technical skills and an increased understanding of theatre arts during the process. 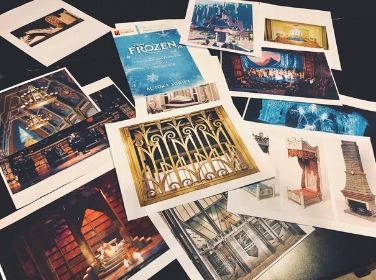 Sketches are made and tiny sets are constructed with Lego pieces to help determine what the set will look like onstage and how it can support the needs of the story and the actors. Snow scenes, castles, and the fantasy environment of Bullis's Frozen Jr. are inspired in part by the movie and by Art Deco and Art Nouveau styles. "We are looking for ways to visually convey the magical effects of snow and ice," Brooks says.

"Throughout the process, we look constantly for ways to encourage growth in the students as performers as well as in their social growth—getting onstage, performing in front of others, working together as cast and crew," King says. "With every day, they get better and better on all levels."

The Middle School's performances of Frozen Jr. will take place on Saturday, February 29, at 2:00 & 7:00 p.m. in Howard Auditorium in The Blair Family Center for the Arts.