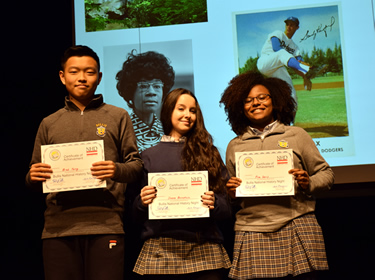 The Blair Family Center for the Arts was transformed into a celebration of American history and student research last week, as members of the Class of 2021 showcased their projects. This event marked the 10th year of Bullis History Night, which is affiliated withÂ National History Day. Each year, students select a topic related to a theme. They each conduct extensive secondary and primary research, craft a thesis statement, and develop a final product in one of four categories: exhibit, website, documentary film, or performance. Students work closely with their history teachers and our research librarian, Dr. Abby Clouse-Radigan, as they edit and refine their work.

Top entries, as identified by a team of Bullis Social Studies teachers and administrators, advance to the Montgomery County competition. This year the Montgomery County competition will take place on February 29 at Northwood High School. There, top projects are selected to compete at the state level and even advance to the national competition held in June at the University of Maryland, College Park. Over the last decade, many Bullis students have advanced to compete at the state and national level, and more than a dozen have placed in the top 10 in the nation.

Bullis History Night is an opportunity to spotlight scholarly work. Parents and other guests tour the history projects and learn about a wide range of topics. This year's theme, "Breaking Barriers," inspired a variety of projects on groundbreaking artists, innovative scientific breakthroughs, and pioneers who broke barriers in fields ranging from athletics to politics. We are proud of the work of all of our young historians!

The following students and projects will advance to the county competition:

Â In the category of Individual Performance, one student will advance:

In the category of Group Performance, one team will advance:

Â In the category of Individual Websites, five students will advance:

In the category of Group Websites, five teams will advance:

In the category of Individual Documentaries, five students will advance:

In the category of Group Documentaries, three teams will advance:

In the category of Individual Exhibits, five students will advance:

In the category of Group Exhibits, five teams will advance:

Congratulations to all of our students who participated in National History Night and helped to make it such a great success!