<Back to News
Caleb Robinson Leads By Example

Flourishing as a leader and a thinker in the Bullis culture 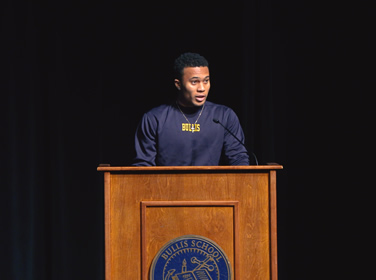 "The first thing I want to do is lead by example," says Caleb Robinson '20. In his role as Upper School co-president, he adds, "I have had a lot of eyes on me."

A lot of people like what they see in Caleb Robinson. In addition to his election as co-president with Hannah Baltimore '20, he was named Bullis football team captain, and this year, the Potomac Chamber of Commerce selected Caleb as the Potomac Youth of the Year. He is a Bullis student tutor and a member of the National Honor Society. And Stanford University recently offered him a place in its class of 2024.

Caleb increasingly appreciates the special place that Bullis and its people have had in his life since he entered as an 8th grader. He has flourished as a leader and a thinker in the Bullis culture, and in return, he has contributed to that culture with his efforts to amplify student voice, connect groups of students with different interests, and lead by example.

A year ago, Caleb attended a roundtable for independent school students around Washington, D.C. "Hearing all the other kids describe their schools and the things they wished they had, I thought, 'We have that at Bullis.'"

The Bullis Global Studies program, Caleb says, brought him out of his comfort zone and out of the country for the first time on a trip to Panama.

He appreciates the Discovery Center, with its light-filled, high tech science labs, community areas, studio theater, and classrooms for kindergarten through 12th grades. Caleb has gained a clearer sense of the broad qualities that define life at Bullis for him:

"Generally our attitude and our morale is really good. But the biggest thing I will take away from here is the sense of joy at Bullis." 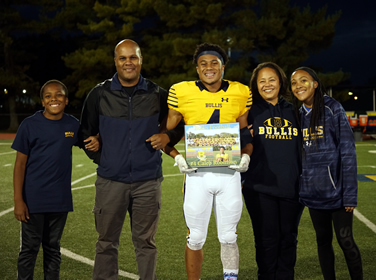 Caleb thinks the Bullis requirement that a student do more than study helps create that sense of joy. "Bullis has such academic rigor, but I've come to appreciate the emphasis on balance. You can't just go home and mull over your academics. I think having to go from class to something else, whether it's a sport or a musical or art, leads to reduced stress as a community." Caleb adds that football practice meant "I would have to mentally switch and forget about studies for a while. In addition to providing an opportunity to do what we love, Bullis gives us a chance to distract ourselves from our academic stress."

Bullis students are involved, and demanding classes, absorbing extracurricular activities, high-level athletics, and the healthy atmosphere on campus encourage efficiency, prioritization, and excellent time management. Caleb is a great example. "Freshman year I did not know how to manage my time well," he says. "I learned from it, though." One of his secrets is to be intentional about free time. Is this time to relax, or time to be productive? "Now I manage my free time better. As I've taken harder classes and my workload has increased, I've also become a lot more efficient. As crazy as it sounds, I get more sleep now than I did during freshman year."

Student government wasn't always the plan for Caleb, but when he saw that he could be impactful at Bullis and be a role model for his siblings, Anna Rose '22 and Ethan '25, Caleb stepped out of his comfort zone again to run for office. He delivered his campaign speech in verse and from memory, winning beside co-president Hannah Baltimore.

"Caleb always works hard and has the best ideas," Hannah says. "He truly does want to make Bullis a better place. We work really well together and I'm glad that he is my co-president."

Caleb also saw an opportunity to increase student voice, a goal he and Hannah have achieved by proposing, organizing, and recently facilitating town-hall-style meetings during Upper School assembly. "That was a really cool experience for me," he says. "That was something we brought to the Upper School administrators and pushed for." At a recent student forum, students listened carefully to one another and offered concrete suggestions that carried the power of coming from peers rather than adults.

âAnother goal that Caleb and Hannah shared this year was to make students with different interests feel central to Bullis. Dylan Moore '20, who loves participating in music and theater, says that the Student Government Association (SGA) team has made a difference in that regard. And Caleb, who attends almost every dance show to see his sister perform, was pleased to see increased attendance and enthusiastic audiences. 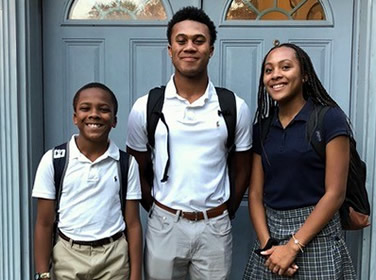 Caleb believes in leading by example, and that's especially true when it comes to his siblings. "People may say they're following in my footsteps, but I want them to make their own footsteps."

Caleb's brother Ethan, a current 7th grader, likes when Caleb drives him and Anna Rose to Bullis. "His traits and qualities sort of go into you," Ethan says. "He makes people better when they're around him." His siblings will miss both the leadership and the companionship of their brother next year. With Caleb attending university in California, "it will probably be a little bit boring here at home," at least at first, Ethan says. Anna Rose agrees. "I'll miss getting head nods from him when we pass each other between classes. And car rides to school will no longer involve crazy dancing and good music (sorry Mom!)."

From his younger siblings to the Head of School, Caleb has left a mark.

"Caleb Robinson has made the most of the many opportunities Bullis provides its students. He is a classic Bullis success story, and we are very proud of his accomplishments," says Head of School Dr. Gerald L. Boarman.

» Look for more great stories about academic life and the Bullis community in the upcoming Bullis Magazine.