Inside story shows Giants could get real gem 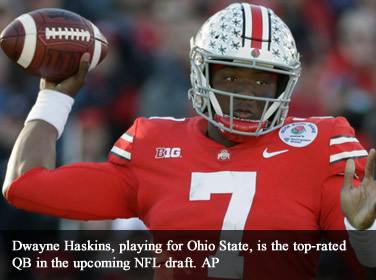 Raised in Highland Park, N.J., Haskins' football sensibilities were honed in Potomac, Md., where he attended the prestigious Bullis School â evolving from a pudgy kid into a dart-throwing quarterback, carrying himself as a quiet leader determined to hit the books and his receivers with equal aplomb. It was at Bullis that Haskins rose to prominence without stepping over anyone else, forging a reputation for academic and athletic excellence as he blazed a trail of inclusion that took him to Ohio State and into rarefied air: He is the top quarterback prospect in the 2019 NFL draft.