<Back to News
Bullis Students and Faculty Lead in Music 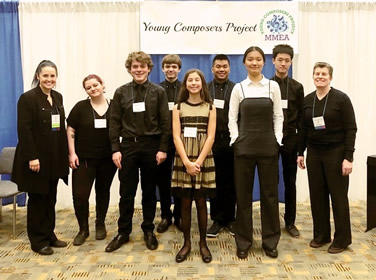 Most of the Bullis community is still humming ABBA after a triumphant weekend of Mamma Mia performances, beginning with an upper-school-wide matinee on Thursday, Feb. 6. But, fewer people are aware that the show opened in the wake of another major performing arts events for Bullis students and faculty.

Bullis students and teachers showed their stuff at the Maryland Music Educators State Conference in Baltimore on Feb. 1-2, where members of our music faculty presented, students played in the Jr. All-State band and several of our student composers were recognized and performed their original works.

Trombonists Sean Mao and Tom Rossi, and percussionist Gavin Ferguson, all Bullis ninth graders, were selected by audition this past November and named to the All-State Junior Band. After several days of rehearsals at the Conference with top musicians from around the state, they performed an exciting concert at Morgan State University. 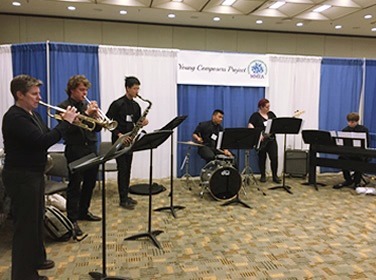 Members of the Bullis Music faculty presented a workshop for educators on their efforts and experiences in working with students to document and share their artistic work through eportfolios. In 2013, Stephanie Mayer-Sattin began to develop and implement an eportfolio program within the middle and upper school instrumental music program that enables student artists to collect and curate a body of work over time, reflect on it, and share it. Its intent is in part to encourage personal growth, demonstrate and meaningfully integrate our Bullis core values and to help students develop repertoire and resources for future opportunities and college applications. Ms. Mayer-Sattin, along with colleagues Michelle Kelly, Lower and Middle School Music teacher, and Cheryl Terwilliger, Director of the Visual and Performing Arts Program, shared benefits, resources, successful examples and guided other music educators in beginning to plan ways to implement reflection and the use of eportfolios in their own classrooms. They will present again on this topic at the upcoming National Association for Music Education All-Eastern Conference in Pittsburgh later this spring, at which composer Alisha Schruefer has also been invited to perform a new work.