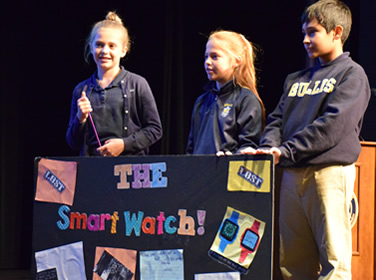 "Have you ever lost your kids?," Eli asked as he began his Shark Tank pitch. His team developed a solution with design-thinking, part of the fifth-grade study of economics and entrepreneurship.

The students presented their solution, a $100 pair of smartwatches that track a child's location and share it with parents, to a panel of four adult judges in the Howard Auditorium last week.

"It was very exciting to see all of the kids' ideas and presentations," said Alisa Halle, a parent of a participating fifth grader. "We've been hearing about it at home. They all had great ideas."

Students began by identifying a problem. The next step was empathy, so students interviewed people affected by the problem. Only after discussing and exploring the problem with others, did students work in groups of three to develop solutions. They made protoypes, created posters, and wrote and practiced their presentations. And then they faced the sharks, who included a senior consultant, a local entrepreneur, an Upper School entrepreneurship teacher and former banker, and the Head of School. 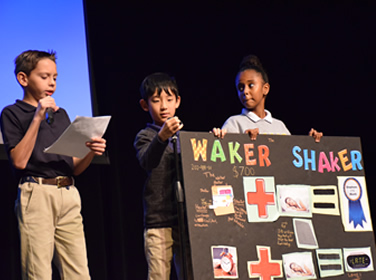 The waker-shaker is a bed that shakes until you stand for a period of time on a mat in your bathroom. This product addressed the problem of oversleeping and the related problem that, "everybody hates alarms!" They decided the bed-shaking alarm system would only stop when the sleeper stood on a mat in the bathroom after interviews revealed that "many adults and children go to the bathroom when they first wake up."

Another group developed a single collapsible sports stick that can be adapted for tennis, field hockey, ice hockey, and lacrosse.

The Buddy Pad enables parents to program screen-time limits right into the device. It also features a homework setting that would block screen-time until a child scans his or her complete homework. "It's ok to enter an established market if your product offers a new feature that people want or performs better," said judge and Entrepreneurship teacher Maria Antokas.

Entrepreneurship is one of four signature programs at Bullis that carry from Lower School through high school graduation. (The others are HGS, Humanities and Global Studies; STEM, Science, Technology, Engineering, and Math; and VPA, visual and performing arts.) The entrepreneurship program hones creativity, critical thinking skills, the ability to communicate, and resourcefulness. Students tackle real-world challenges and learn to support their ideas with data and research.They also practice flexibility and resilience. 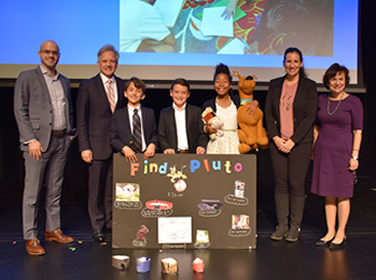 Despite the fact that it was well positioned in the marketplace, the Buddy Pad was edged out by FindPluto, a trackable pet collar that pairs with a phone app. The students made a strong case for this human alternative to embedding a chip into a pet.

"The students learned public speaking and leadership," said LaWanda Dates, mother of another participant. "That's part of Bullis too. That's what they doâthey put them out there and they gain poise and confidence. My daughter has been here since third grade and I can see the difference!"


Visit the Lower School Open House for students entering Kindergarten to Grade 5 on Sunday, November 4 from 1:00-3:00 pm. Or schedule a tour by calling (301) 983-5724, or emailing admission@bullis.org