<Back to News
Impact Class Lives Up to Its Name 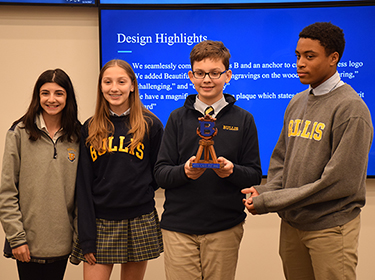 This year marked the addition of a new elective minor available to Middle School students. Impact meets twice a week with teacher Jason Kezmarsky, learning design thinking and "empathy education and effective project management strategies," as Middle School Principal Dr. Marilyn Moreno describes. The students learn to be self-directed via Mr. Kezmarsky's facilitation and guidance, and identify projects of community impact that they tackle via problem-solving and the practice of process techniques after gathering customer input. 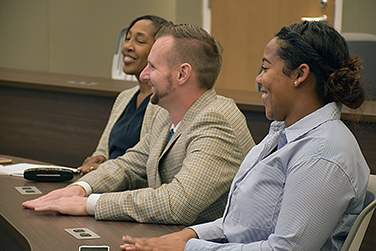 All of that can be daunting for Middle School students, but Dr. Moreno and Mr. Kezmarsky have been impressed with the dedication and open-mindedness of the students. Their first project to design a spirit trophy for the Middle School provided the perfect platform for them to learn how to "function in groups, find their role, practice empathy and self-awareness, gather input, accept criticism and put aside their own interests to meet the needs of their customer," as Mr. Kezmarksy describes. 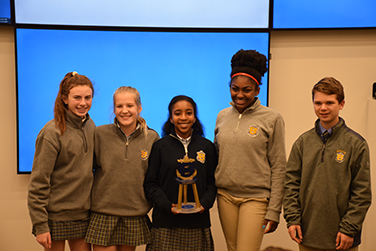 The students worked in two teams. First they interviewed Dr. Moreno and Assistant Middle School Principal Matt Trammel to ascertain what the trophy should look like and what it should convey. They then filtered that input into a final drawing, and met with BITLab Coordinator Matt Zigler to translate that guidance into a three-dimensional trophy concept. He taught the students about the capabilities of the BITLab and helped them build their design, using whatever tools or machinery they thought would best produce the trophy they envisioned. 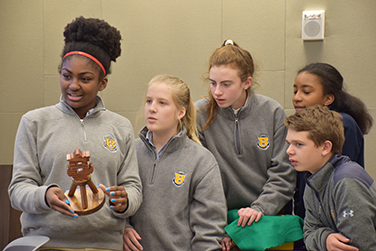 Through the process with Mr. Zigler, the students noted the need for specificity and clarity in communicating their wishes, and learned also to appreciate the value of the unexpected as well.

As the fall trimester came to a close, the students presented their final trophies to Dr. Moreno and Mr. Trammel, and for the first time also saw the products of the other team. The students were impressed and amazed at how similar the trophies were, and also appreciated the differences between the two both in materials used, size, and the emphasis of one trophy on spirit and the other on leadership.

The Middle School administrators were also impressed with the results.

"As their first customer," said Dr. Moreno, "I couldn't have been more pleased with the results and they definitely surpassed my expectations. During the initial interviews to gather my input for the trophy design, the students asked meaningful, probing questions to clarify my guidance. They listened actively then worked collaboratively to design prototypes. Their next challenge was clearly presenting their ideas based on the interview to Mr. Zigler in the Bullis Innovative Lab. The trophies were created, reviewed and recreated prior to the final product being revealed during a classroom presentation. The impressive results speak for themselves!" 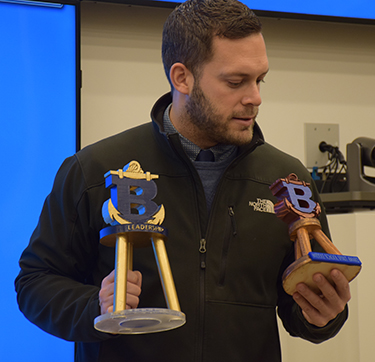 In fact, the results were so good that Dr. Moreno and Mr. Trammel decided to use both trophies, for different purposes. "The School Spirit trophy will be awarded to the Blue or Gold team who wins the most recent Spirit Competition. A Gold trophy will be created to complement the Blue version that the team created for the project. Then the blue or gold trophy will be placed on [Administrative Assistant] Ms. Chafin's desk to celebrate the winning team until the next Blue/Gold competition," explained Mr. Trammel. 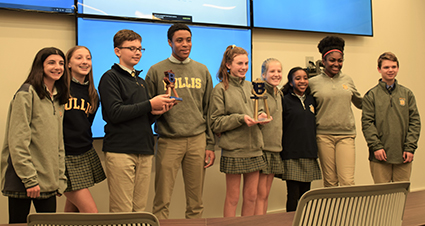 The Leadership trophy will be used to celebrate the awarding of Anchor Pins. "The trophy may go to the Blue or Gold team (the team who earned the most anchor pins for the year) or could be awarded to the grade level with the most anchor pins earned. Anchor pins are awarded to students who represent the Bullis core values in a particularly meaningful manner as a result of a specific behavior," says Mr. Trammel.

"I am looking forward to the second phase of the Impact Course," says Dr. Moreno. "During the second trimester students will identify a need within the broader community, conduct research, and create solutions that will be revealed in front of an audience in the spring."