At Bullis, the safety and security of our students and staff is our top priority. The Bullis Safety and Security Department establishes systems that ensure everyone on campus is well-protected, safe and able to focus on the activities of school life. 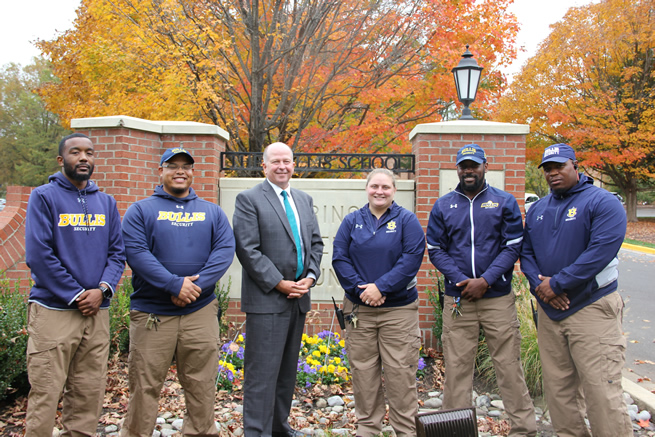 Director of Bullis Safety and Security David Buerger, (center), is a retired captain from the Greenbelt, Maryland, Police Department, where he spent more than 25 years as a police officer, supervisor and manager and organized community policing initiatives and police specialty programs. He also developed and implemented the first school resource officer position in the state of Maryland which became the model implemented throughout the D.C metropolitan area. Mr. Buerger has trained law enforcement officers and educators throughout the country on the management of school safety, and served on the board of directors of the National Association of School Resource Officers. He holds a M.S. and B.S. in management from the University of Maryland University College and is a graduate of the FBI National Academy Session #232.

Co-founded by Bullis alumnus Samier Mansur ’03, LiveSafe provides safety communication services to colleges and universities throughout the country through the user's smartphone. Bullis is the first private school in the nation to partner with LiveSafe for our emergency notification system.

LiveSafe provides more features than simply e-notifications to users during weather or other emergencies. Their sophisticated LiveSafe application, customized for the Bullis community, also provides a mobile platform that allows users to text message and receive replies from trained Bullis personnel. Students, staff and parents will have a quick and easy means for alerting security about anything that should be reported—or even just if they want something investigated. Through iPhone and Android devices, users will also have the ability to report GPS-tagged information with added pictures, videos and audio clips. When students, staff or parents send information, we will know where they are on campus and can respond immediately.

If you have any questions, do not hesitate to contact David Buerger, Director of Security, by email or by dialing 301-634-3606.

Bullis’ emergency plans went through extensive review by the staff Safety Advisory Council. The result is a robust plan designed to better prepare our community for potential emergencies. In addition to publishing a quick reference guide for each classroom and office, detailed plans are available in electronic form and through our LiveSafe safety app.

In addition to monthly evacuation drills, a variety of safety drills (lockdowns, weather shelter, law enforcement shelters, and bus evacuations) are conducted on a regular basis to better prepare staff and students for potential emergencies.

Licensed Upper School juniors and seniors may park on campus but must first register online.

Upon registration and payment, students will receive a hang tag for their windshield which must be displayed at all times while the vehicle is on campus.

BULLIS EMERGENCY INFO: GET THE APP

I guarantee no school does a better job making our children feel safe than our Bullis security team!