In the fall of 1994 Bullis introduced field hockey as a new sport for its female athletes. The inaugural season was anything but easy. Coach Judy Cromwell faced many challenges as she led a group of young players against more experienced opponents. The following season, with a yearâs worth of experience under their belt, the team showed much improvement. The girls posted two wins and played all of their opponents closely. Most of the games were lost by only one or two goals.

In 1999 the program experienced a real surge. Coach Tina Saudekâs team posted a final record of 7-9-1. Though they did not end with a winning record, the girls did however amass the most wins ever in its brief history. In 1999 Coach Kate Smith became the fourth head coach of the field hockey program. Smith continued to build a solid program over the next seven years.

Julie Delinsky took over in 2006. After the first year, Delinsky had seven winning seasons in a row. In 2012 she brought about a team that won every game in the regular season. That led to Bullis winning their first ISL banner in field hockey in Bullis history. The 2012 team went to the finals in the ISL playoffs, only to lose a heartbreaking game 1-0, and ended their season 17-1. During this season they were ranked #5 in The Washington Post, the highest ranking the program has ever achieved. Danielle Wilcox took over in 2014 after being an assistant on Delinsky staff in 2012 and 2013.Since the 2007 season, the Bullis field hockey team has enjoyed a winning season for 11 years. 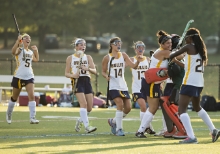