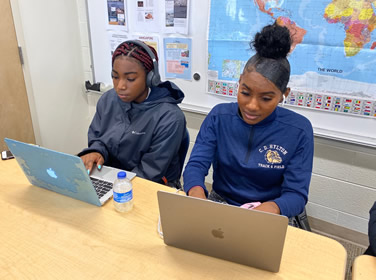 The objective of the project was to develop their rhetorical and digital presentation skills, utilizing Wevideo to create the recording with the embedded images. In the second year of this project, students then also used Flipgrid as the curating tool for the final products both to share their work and provide feedback to one another.

Prior to beginning the project, students received instruction about what makes a good speech with reminders about how to effectively using images to enhance the audience experience. Cathy used a speech from Malcolm X structured much like the students' final product which allowed them to see what it might look like in the end.

Since we have a site license of WeVideo at Bullis, we decided to use this tool to have students create and edit their project. Students had access to a Wevideo tutorial to support the project but most were already familiar with the tool based on experience in prior courses. One of our reasons for purchasing a site license of WeVideo was to allow all students - regardless of whether they have a Mac or a PC - to have access to a powerful video editing tool.

After all students created their WeVideo projects, we used Flipgrid to showcase the projects. Most people know of Flipgrid as a video discussion platform where students record directly within the platform. But Flipgrid also allows students to upload video projects to the "grid." Students then watched and offered feedback to four (4) other peer podcasts by both using a rubric and adding "positive" feedback as a "reply" on Flipgrid.

This project allowed the students to find a powerful voice and creatively express their interpretation of the speeches, while also providing one another authentic feedback. Since a large part of the lesson was teaching rhetorical skills with an audience in mind, Flipgrid allowed that immediate "audience- like" feedback and students are able to translate that into the next project that builds on those same skills.

Share to FacebookShare to TwitterShare to Google+Share to LinkedInShare to PinterestShare to EmailPrint this page
Covid-19 Updates
Reopening Plan
Fall 2020
RSS Feeds Subscribe to Alerts
December 4, 2020