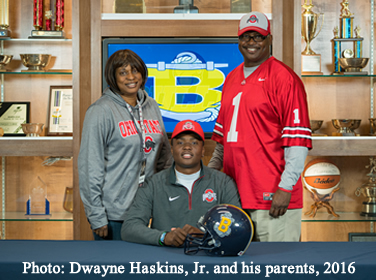 Dwayne Haskins Jr., a Bullis 2016 graduate, was picked in the first round of the NFL draft Thursday night by the Washington Redskins.

As a new Sophmore, and then again as a Junior, Haskins led the Bulldogs to Championships. Over his three-year career at Bullis, Haskins passed for 5,308 yards and 54 touchdowns. But the stats don't tell the whole story. Dwayne is an honorable, smart, and family-oriented young man. His faith, maturity, and integrity are as strong as his arm.

The Bullis community couldn't be more thrilled for him.

Check out some of Dwayne's Bullis School football highlights.