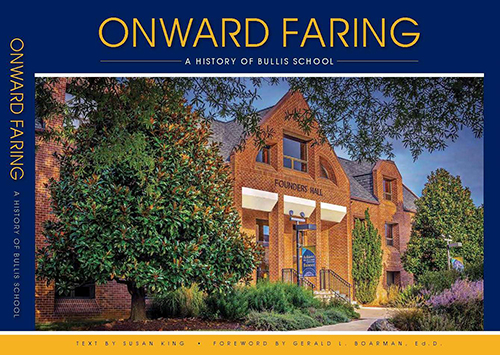 In 1930, Captain (ANG) William Bullis and his bride, schoolteacher Lois Hoover Bullis, founded a small preparatory school in Washington D.C. for post-graduate young men wishing to enter service academies. Captain and Mrs. Bullis could not have imagined then how far their dreams would take them—or how much their school would grow. Nearly ninety years and thousands of graduates later, Bullis School has become one of the finest independent coeducational institutions in the Washington D.C. area.

Onward Faring details the story of Bullis from its beginnings in a D.C. embassy building to today’s magnificent 102-acre Potomac campus—revealing the evolution of the School’s educational strength and its growing community of dedicated staff and outstanding students, alumni, parents and friends. Bullis School’s story is one of tradition, change, challenge and innovation—and is well worth the telling.

This long-awaited hardcover book brings the School’s history to vivid life through narrative, anecdotes and photos—a beautiful volume that every member of the Bullis community can savor, share and treasure.

The following is an excerpt from Onward Faring, a book of the history of Bullis School by Susan King with a Foreword by Gerald L. Boarman, Ed.D. 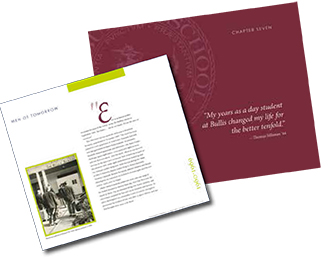 The nation was still reeling from financial shockwaves when William Francis Bullis married Lois Elizabeth Hoover on November 27, 1929. The tall, lovely bride wore a white lace gown and a clochecap veil, and carried a bouquet of fresh flowers. The groom wore white tie and tails. Surrounded by family and friends, they smile, timeless, innocent and hopeful, in their wedding photo. Their marriage would prove long, successful, dynamic and supportive. On that frosty November day, they had no inkling of the close family and powerful educational legacy they would establish.

The venture and vision of a preparatory school suited both bride and groom. By then, Captain Bullis knew he wanted to teach, even start a preparatory school. His impressive charisma and determination were assets in a headmaster shouldering the responsibilities of a start-up school. Lois was his perfect partner: smart, energetic, gracious, organized, a teacher herself, she would keep the books and run the office, kitchen and boarding concerns. Both understood the needs particular to a school, and both believed wholeheartedly in each other and in their shared dream.

Despite the economy, the newlyweds found a suitable place for their school: an old mansion for rent in a prime location—the former Bolivian legation at 1303 New Hampshire Avenue in northwest Washington, D.C. The spacious mansion needed painting, repairs, furnishing and repurposing to be transformed into a school. Dipping into their savings, William and Lois did much of the work themselves and acquired used furnishings and equipment. With paintbrush and ingenuity, they restored areas and arranged
classrooms and dormitory rooms. Bullis School anniversaries are counted from 1930, that first year of founding and elbow grease.

The original Bullis curriculum did not include physical education, but in 1934, calisthenics were added—a half-hour of sit-ups, pushups and jumping jacks that allowed the boys to condition and let off a little steam. Soon it was evident that the students needed a greater physical outlet after studying for hours; at first they played impromptu football or baseball games on a vacant city lot near the New Hampshire Avenue location.

Service academies expected top physical condition in their candidates, yet Bullis focused on academics to get students through tough service exams. Not all colleges required physical education credits then, although debates in American educational forums argued that it was necessary. For Bullis to continually improve its program, physical education was essential. Part of the issue was finding adequate space and playing fields in D.C., although that would occur with the move to the Silver Spring property in 1935.

Until then, the Bullis boys formed small opposing teams, marked makeshift goals and played with enthusiasm if little gear. A 1935 ledger recorded the purchase of one football along with jerseys, helmets, shoes (presumably cleats) and more for a considerable total of $299.95. In 1938, several “Spalding helmets” cost the school $15.93. Captain Bullis had a frugal habit of finding used athletic equipment. Scarred, worn, mismatched, passed along from one Bullis team to another, the helmets would do. Now the Bullis boys had teams, they had equipment, and they were eager to play.

To request a copy of the book, please contact our Communications team.